Sometime in 2005, players who died were suddenly and unexpectedly transported Dead Moorgate instead of the usual plane of death located under the rest shrine. Dead Moorgate is a poorly implemented punishment for dying and death in Cosrin -- Players who died on the day of implementation were, without notice or explanation, suddenly in an unfamiliar room with a lot of confusing out of character instructions about where they were supposed to go with no obvious way 'back'. There was no event or explanation to implement Dead Moorgate, it was just suddenly there as if it had always been there. One theory, gleaned from a couple obscure room descriptions and quests [1], is that Dead Moorgate is a future version of Moorgate after some unknown apocalyptic event. But still it makes no sense why you would die and go to the future. While in Dead Moorgate (and Dead Stormport) players are not able to use tells, shouts (or wails?), or guildshouts. Players can still use the chat channel and the MESSAGE <player> feature. Many people were confused about the new death system and quit Cosrin, others spent hours and hours making new maps and trying to figure out how to get back to regular Moorgate. 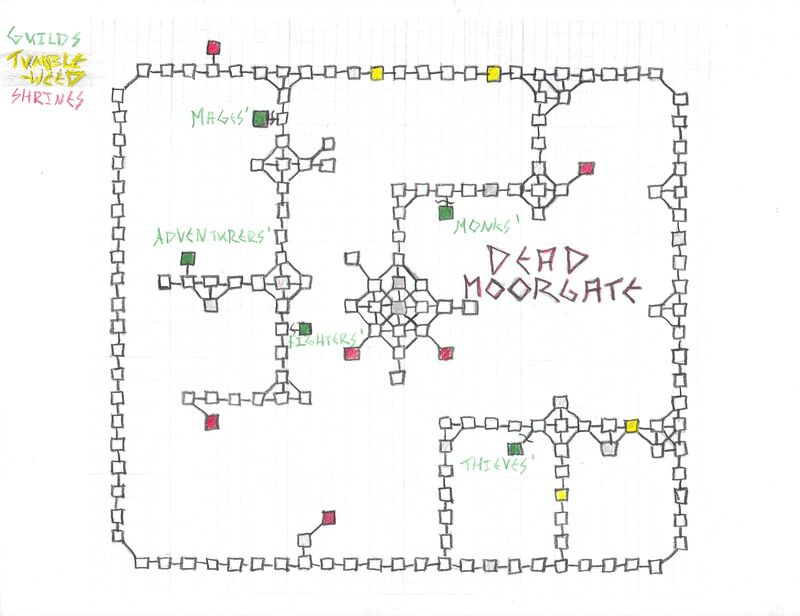 There are two ways to leave Dead Moorgate, one involves a tumbleweed which changes its location every time the quest is done, and another requires using obscure commands to get in and out of several hidden places within Dead Moorgate to find items by using yet more obscure commands to complete a quest chain. The latter method also involves trudging through the Dead Sewers which can become populated with some pretty nasty mobs if several people go through them in quick succession (i.e. during invasions, it is impossible to leave via this route because your character gets advanced and you die again). Sometime later, the Dead Cities were made optional. Going "down" from the plane of rebirth currently takes you to the Dead City of your choice, while going "up" bypasses those areas entirely.

A macro has been created to quickly escape Dead Moorgate through the sewers, although sometimes the sewer topography is changed when a new version of this macro surfaces. Use with caution.

Community content is available under CC-BY-SA unless otherwise noted.
Advertisement